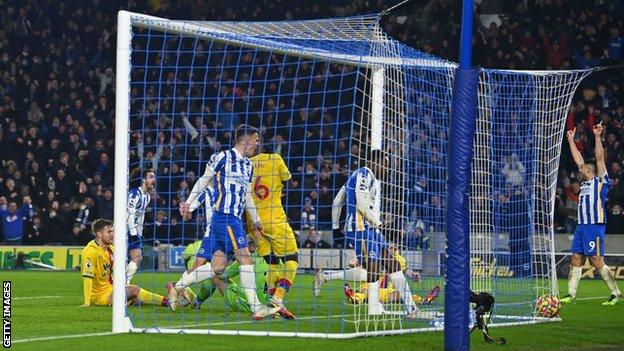 Brighton hit the crossbar, had a goal disallowed and a penalty saved before scoring the equaliser

A late own goal from Joachim Andersen salvaged a point for Brighton in an eventful encounter with Crystal Palace at the Amex Stadium.

Brighton had a goal disallowed and a penalty saved in the first half before Conor Gallagher's 69th-minute strike.

The Palace midfielder, who coolly slotted in Jeffrey Schlupp's cut-back, looked to have snatched all three points for the visitors.

With three minutes left, Neal Maupay's low cross was deflected in by Anderson.

It was a deserved equaliser for Brighton after they created numerous chances but were denied by goalkeeper Jack Butland, who was in fine form.

Butland denied Pascal Gross from the spot in the first half, kept out Leandro Trossard following a huge error from defender Joel Ward and later tipped Jakub Moder's effort over the bar.

Brighton's Moder also hit the crossbar within minutes of the restart after Maupay had earlier bundled it over the line, only for the goal to be ruled out for a foul on Butland.

In a frenetic few minutes before half time, Jones awarded the spot-kick when Will Hughes had his arms around Joel Veltman but Gross' poor effort was saved. From the resulting corner, Maupay had a high boot when he challenged Butland's grip on the ball on the goalline.

Palace were holding on in the final minutes as Brighton pushed for a winner but the hosts had to settle for a point.

Rate players out of 10 throughout or after the game. The rater will close 30 minutes after the final whistle.

Rating range key1 = Give it up10 = Pure perfection